Order a signed copy directly from the author. 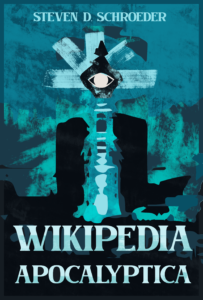 In Steven D. Schroeder’s Wikipedia Apocalyptica, nothing is as it seems—fugitives, the frontier, the undead, official statements, dating—even the apocalypse personified is not what we anticipated as it learns to “sidestep / detection efforts” and “hungers for understanding.” Schroeder’s speculative, deft lyric poems are infused with wry wit and expose our current culture by upending language. This is a phenomenal book.
—Suzanne Frischkorn, author of Fixed Star & Girl on a Bridge

Wikipedia Apocalyptica is as absurd as the world it addresses, but way more fun. With equal parts precision and weirdness, Steven D. Schroeder’s tight, perfect poems skewer everything from political doublespeak, to insatiable corporate jobs, to social media clickbait, to police brutality, to ruin porn. These poems are rebels who wish they didn’t have to be, who wish they didn’t have to chafe against all this nonsense but cannot help it. I hope against hope that someday, they won’t have to. Meanwhile, may Schroeder stay irritated. May he continue to call out the big and little hypocrisies that permeate our work, our relationships, our public discourse. His annoyance is the reader’s delight.
—Jenn Koiter, author of So Much of Everything

“Oh what a twist to read the end / and believe, only to discover/ the cover shut on us.” Steven D. Schroder’s Wikipedia Apocalyptica is a chronicle of the cunning juxtapositions we face every day in a world where we have prescribed our own demise. Schroeder’s poems are consistently questioning whether we name the apocalypse or whether we hide it, mask it, or marginalize it. It is to this end that meaning itself is replaced with happenstance tragedy: “We traveled to the inevitable, driven / home by nailgun thump-thump / speech of speedbumps, potholes, / bodies: wrong way, wrong way, so long.” And like the evening news, this collection is all captivating disaster–the most satisfying of train wrecks–from global warming to Covid to first dates to zombies, all dripping in their own eventual wreckage. The language, sometimes delicate and sometimes encyclopedic but always poignant and seductive, is invariably charged with what is to come–the stories unfold through unexpected images that beg us to question their authenticity. Notes are placed in margins, words are hidden in holes, “That dot is a pitfall.” Whether we like it or not, Schroeder’s collection punctuates our participation in our own eventual catastrophic end: “Woken by the hotline, / we pushed the button designated / Retaliate and when that dysfunctioned, / one marked Meltdown flashing red.”
—Mackenzie Carignan, author of a house without a roof is open to the stars

Winner of the 2014 Devil’s Kitchen Reading Award in Poetry from Southern Illinois University!

Buy it from Amazon or Powell’s Books. 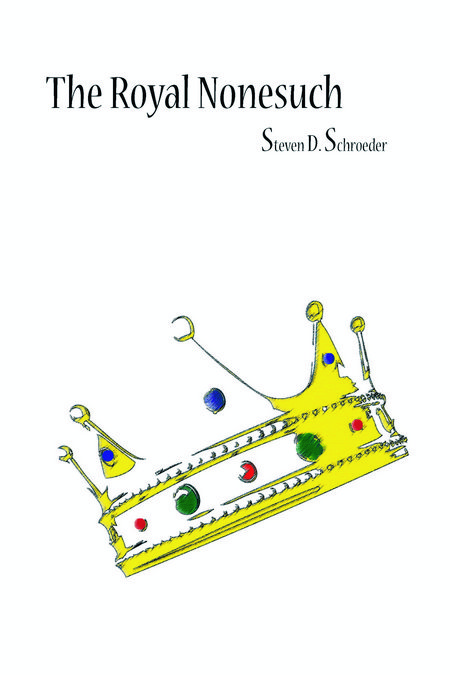 In The Royal Nonesuch, Steven Schroeder shows the art of the scam—in gambling, cynicism, piracy, into the brink and out of love—but, like Mark Twain, he knows a trickster’s act plumbs the very real loneliness of modern society. Beneath this shield of doublespeak beats a wounded heart. In “Each One Goes Alone,” the speaker reflects “When you pick a new city for foliage and brick / in promotional photos, the baggage follows.” Working in the interstices of titles taken from literature, pop culture, even Nintendo, each poem jousts with our expectations. “I’ve Had a Perfectly Wonderful Evening” breaks down the code to “If by evening you mean overflowing crockpot,” while the poem “No Hope Except in Arms” announces “This fighter jet is part of a complete breakfast” and “This gun wants to tuck your kids into bed.” Don’t try to take on this smart, perverse collection all at once. Sample it like a neat gin; let it burn on the way down.
—Sandra Beasley, author of I Was the Jukebox & Don’t Kill the Birthday Girl

Steven D. Schroeder is a DJ and a pomo Sonneteer. His poems “swim the English/language.” Text lifted from literature and pop culture is sampled, recast. His riffing is catholic and quirky. Nirvana, Harryette Mullen, Laozi, and Patton Oswalt. His thirteen-line sonnets are sonic-rich, but most impressively, elastic. Black humor, tenderness, world-and-word weariness, capitalism, awe, our peculiar American moment are sampled, recast again and again. In these sonnets “cash makes you fun” and “summer fits in an ice chest.” Schroeder’s attentiveness to language is playful and thrilling.
—Eduardo C. Corral, author of Slow Lightning

In Steven D. Schroeder’s remarkable second book, The Royal Nonesuch, “Everything is falling up or sideways.” The miraculous cavorts in the attic while the endlessly possible rolls on and on in the dots of loaded dice. Ever present among the springs of Schroeder’s lyrical language play are the assemblages of his literary legacy. A line from a beloved book triggers a flirtation. A sentence blossoms into a map to stolen gold. And with the striking of a match, the gears of Steven D. Schroeder’s Rube Goldberg machine turn in their glass box. The lights blink and creaking wheels spool into beautiful sounds. The Royal Nonesuch is an exquisite joy.
—Oliver de la Paz, author of Requiem for the Orchard & Furious Lullaby

As fractured as our times, but critical of fracture, not simply agreeing to it, the poems of The Royal Nonesuch press against their own concerns. “You could hear we’re post-apocalyptic” the book begins, and even so, we continue our lives, our various concerns, common as theft (as all the titles of this book are “stolen”), but true as any other life. We need directions, both “how to” and “which way.” It’s an enjoyable read, even through all the disasters, all the chain stores and root canals Steven Schroeder takes us down, because at the center, this is a book that enjoys life. There’s a cleverness that sounds an awful lot like hope weaving though these poems, where just because “you can’t prevent this ragdoll fall,” doesn’t mean anyone here’s giving up. And just because we’re at “another false summit” doesn’t mean all summits are false. Or maybe it does. Maybe they both do. That’s part of the question too, as every assertion twists with its opposing force, and all final thoughts are simply another station along the way. “So we offered our testimonies to the best / of your recollection” Schroeder writes, but your recollection “pled the fifth / that hid behind the Pledge and Drano bottles.”
—John Gallaher, author of Map of the Folded World, editor of The Laurel Review

Buy this book from Amazon or Small Press Distribution. 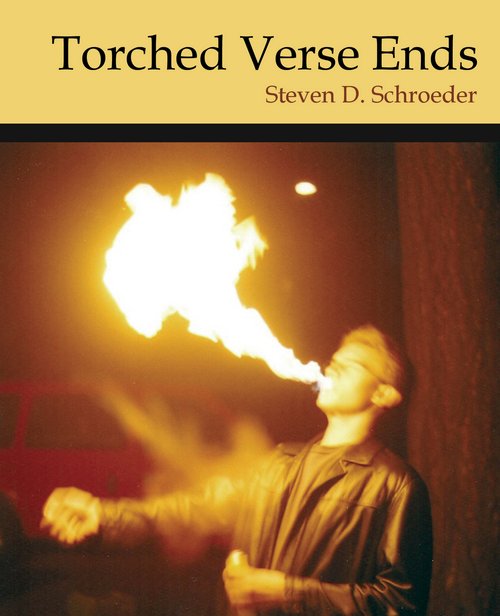 These are the poems of a hooch-swilling layabout, shifty-eyed sneak thief, disagreeable cuss–in short, good work, but he scares my kids. That shaved head and Satanic goatee? The yelling about the government?
—Aaron Anstett, author of Each Place the Body’s & No Accident

The poems in Steven D. Schroeder’s debut collection are not for the faint of heart. I mean this as the most serious of warnings. Upon reading them, you may find yourself locked in a cloakroom with nothing but his pages and a musty parka between you. Even if you resist, you may still dream, nightly, of absconding to Times Square with the author, frolicking in the orange light and snapping pictures. Buy three copies: one for the bookshelf, one to hide under your pillow, and one to keep close to your body at all times.
—Mary Biddinger, author of Prairie Fever, editor of Barn Owl Review

The poems in Torched Verse Ends revel in the interconnections between humans and our place–real or imagined–in the world. So it is fitting that the poems shift locations with the personalities of the speaker. Some poems wisecrack their way through Matt Groening’s Springfield. Others speak to us from Robotland, in the “error error error” of metallic vernacular. Still others employ more somber diction: Colorado as seen by forest firelight, the road somewhere in the flat between Colorado and Kansas. Regardless of place, Steve Schroeder’s poems move us forward toward the hills and rivers where the “Earth’s curve intensifies downhill.” The poems keep us safe in their own geography.
—Adrian Matejka, author of Mixology & The Devil’s Garden

In Torched Verse Ends, Steven D. Schroeder pulls poetry out of its too-small boxes and scatters it all over the room. One poem imitates form, the next mocks mental health surveys, and the herky-jerky music mixes high diction and slang, pop culture and wordplay, solemn hymns to nature and geeky robotic laws. Why deny lines like “Nature is a MILF” or “Artificial plants inhaled oxygen, exhaled chlorofluorocarbons” or “Your lips could suck the gin from juniper”? Schroeder is a serious poet, whether the poem is sad, surreal, or just plain silly.
—Richard Newman, author of Borrowed Towns, editor of River Styx

Steven’s vocabulary is so extensive that I have to look up several words per sentence when reading his current poems.
—Steven’s grandmother